Well, about 6 months ago I qualified for an upgrade on our cell phone plan.  Jerry had gotten one prior and it was working good, so I chose the same one.  However, the screen on Jerry's had become really damaged from keeping it in his jean pocket.  Honestly, you can hardly see anything on his.

The only purse I carry is a jean purse made for me years ago by my daughter Jessica of Sunny Stitching.  So, not wanting the screen damaged and not wanting to have to buy a holder, I started thinking about what I had at home to use.

I was in physical therapy and one of the aides had given me two soda/beer can covers with the Chargers logo that he had gotten while attending a Chargers/Green Bay Packers game.  He liked Green Bay and I like the San Diego Chargers
.
Finally I had an idea to make what I needed without any pattern, etc......exciting for me!

I took one of them, cut it to fit the cell phone leaving a 1//4" seam allowance, sewed the bottom and two sides, turned it right side out.....and it was done.  I thought about using the tab at the bottom of the original holder to velcro over the top to hold the phone in....but just like to grab the phone easily.  Thinking now, would probably do that also next time. 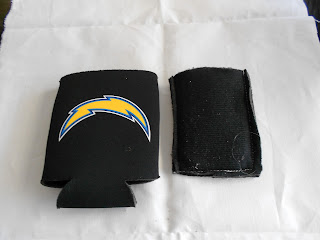 Not beautiful, but since it is neoprene, the screen on my cell phone has stayed clear and the velcro that keeps the pocket closed it sticks to a little part of the holder and keeps it in place. 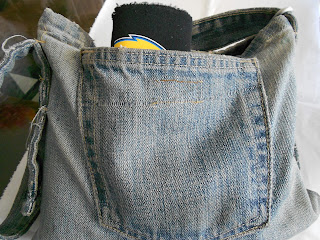 Wow...a lot of talk over such an easy project.....I apologize for such wordiness.