I got a little bored working on an afghan over the weekend so I decided to crochet a new hat for Evie, my granddaughter who lives in England.  I was inspired by a cap pattern in the July 1993 issue of Golden hands Monthly Magazine.  I did a variation on the flowers but did use the basic hat pattern in the magazine article.  The pattern size was for an average 4 year old.

Henry, my 4 year old grandson agreed to model the hat for the 2 pictures for this blog post.  He is a real trooper but he did tell me that when I make him one, he wants it to be blue and that I cannot put flowers on it!  He picked out the blue yarn from my yarn stash and I promised him there would be no flowers!  The picures are below. 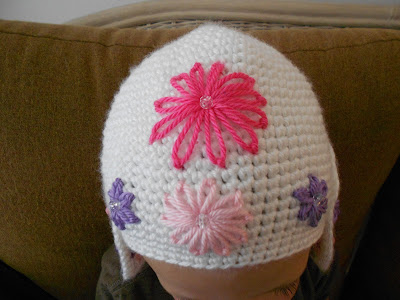 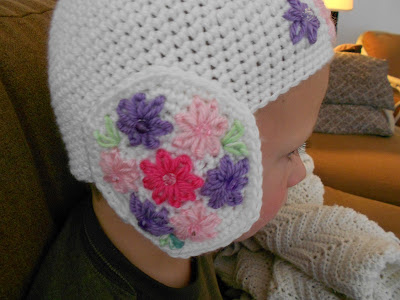 I put some light pink, purple and clear beads in the centers of all the flowers to add a little sparkle.

I am excited to take it to Evie when Jerry and I visit in April.
Happiness to everyone this week!
Posted by Jerry and Kay at 7:46 PM

Email ThisBlogThis!Share to TwitterShare to FacebookShare to Pinterest
Labels: Crocheting