I was motivated by CrashYourStash March Challenge to craft with the most abundant supply in your stash. The most abundant supplies in my stash are yarn and fabric and buttons.   I had some leftover butterfly fabric that my daughter had used many years ago to sew when she was into butterflies.  She had partially sewed a pair of shorts and a pocket out of the fabric. I had been wanting to use it to make a garment for her daughter who is 3yrs old. 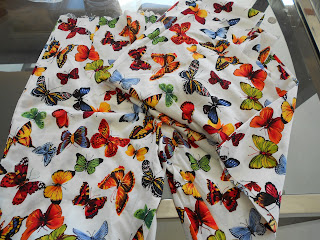 I noticed a dress on Creative Chaos and really liked how the skirt was constructed.  I had already decided I wanted a t-shirt to be the top of the dress.  I had previously purchased two t-shirts at the 99Cent store and decided to use them for the top of the dress.  They look grayish in the photo below but were really a periwinkle blue.  I think the lighting in the room was not good for the photo. 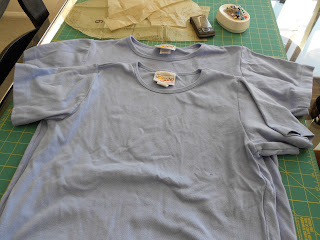 I found a McCall's Pattern in my patterns stash and chose #6386 to use for the top. 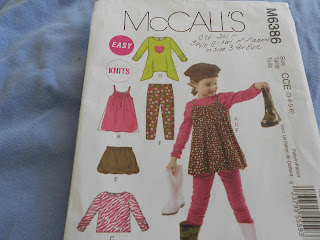 I cut out the top but cut it shorter using the marking "waistline" for the length to cut it.  This photo really shows the nice periwinkle color of the t-shirts. 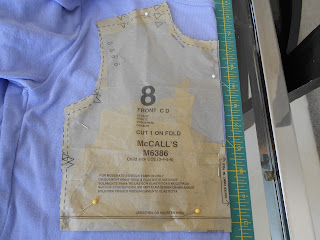 Then I constructed the skirt using the tutorial as mentioned above and sewed the skirt to the top. 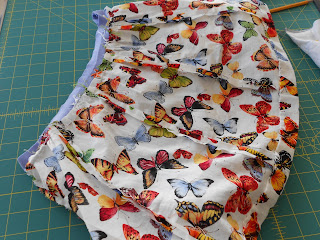 I wanted to embellish the dress so embroidered some flowers and french knots along the waistline.   Added a green button to a pocket that that had already been cut out of the fabric to the skirt.  The top still needed a little more color so I saw this great fabric flower tutorial and made a flower for the dress top.  (I saw the flower tutorial on the same tutorial I used for the headband mentioned below.) 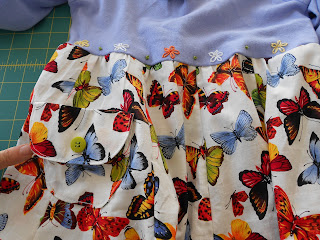 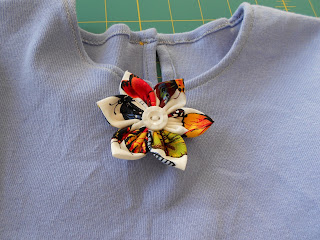 There was still leftover fabric so I sewed a headband from a tutorial on Joyfoolery.  I only made one change on the headband from the tutorial and covered the elastic with fabric.  I realize it may make a difference if the headband will stay on but can always remove it if needed. 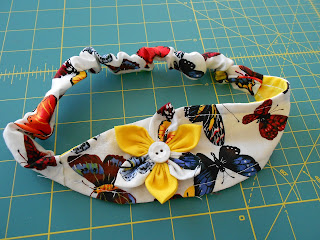 I handsewed the hem so it would be easier to adjust if I need to when my granddaughter tries it on as she lives abroad in England.  We are visiting in April and will take it. 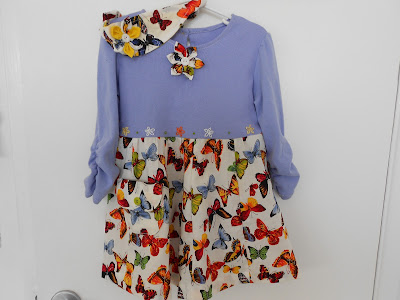 It was a little sentimental using the fabric as it brought back memories of being used by my daughter many  years ago....but I can get sentimental about a lot of things!


So Thankful To Be Sewing!
Posted by Jerry and Kay at 5:49 PM