As I mentioned in a previous post, I have been working on an afghan for my son.  I had made one very similar to it many years ago and it was lost in one of his location moves.  I knew he felt sad about it and for a long time I have wanted to make him another one.  I finally found really similar colors to the original afghan in the Caron line of Simply Soft Yarn worsted weight selection.  I used Dark Country Blue, White, Grey Heather, and Country Blue.

Many years ago I was friends with a most wonderful woman named Edna who was in her 80's.  She loved to sew and crochet even though she had glaucoma.  She passed on the pattern I used to make this afghan.  I imagine she got it from another source but I am not sure as it was back in the 1980's.  The one I have is handwritten by her and I treasure seeing her handwriting.  The name on the handwritten copy is Navajo Afghan.

I made it longer since Joel is 6' tall and wider than the pattern called for.  I personally prefer wider than narrower afghans....The size came out perfect for him to use.

I usually do most crocheting in the evenings while watching television and have really enjoyed making this afghan.   I gave it "finally finished" to my son today and he was thrilled. 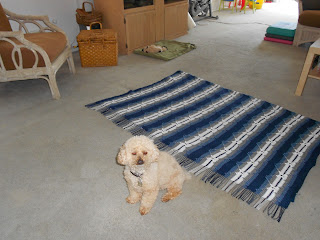 Brandy, our precious dog wanted in the picture:)..She did sit on the couch a lot of the time I was crocheting it. 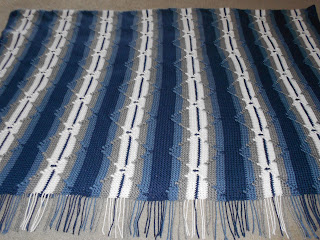 The afghan is folded in half for the photo.
The fringe which represents the beginning and ending of each row is cut to be 4" long. 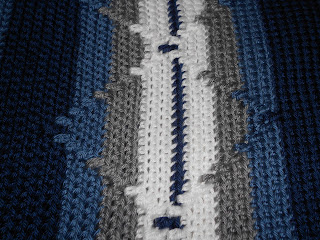 Close up picture of the beautiful design that runs throughout the afghan. 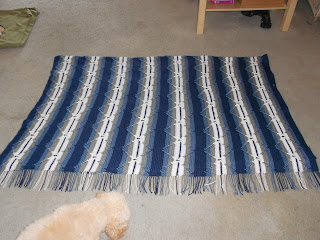 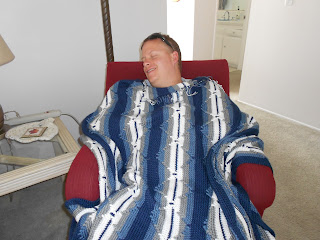 Joel takes ownership of the afghan!!!!!


“A crocheted piece is the lovely manifestation of a thought, expressed through hand, heart, hook, and yarn.” – Francine Toukou