My Knights in Shining Armor

One day my daughter Jessica (otherwise known as SunnyStitching) and I were talking about boys clothes versus girls clothes and decided to make some colorful clothes for her son Canaan.  Canaan really likes some of his sister Evie's clothes that are fun and colorful.

Canaan and Evie love so much to pretend play.  Of course, Evie is usually a princess or fairy or Cinderella so Canaan is a prince, knight...to play along.  They are so cute and Jessica joins in which is delightful.

Their family comes to visit each summer so these last few weeks I made a Cinderella Dress  for Evie to wear to pretend play.  Even though Cinderella had a Prince Charming, I decided to make a Knight in Shining Armor outfit for not only Canaan but also for Henry, their cousin who lives only 5 minutes away.  Jerry actually chose the fabric when we were shopping at JoAnn's Fabrics for Cinderella dress fabric.  He chose such cool fabrics.

I used Simplicity Pattern 5520 which was on sale for $1.00!!!!!!  Jerry can use his military discount there which is either 15% or 20% off regular and sale prices.  As you can see the other outfits hold much promise to be made also:):):)...well not this week but maybe for Christmas? 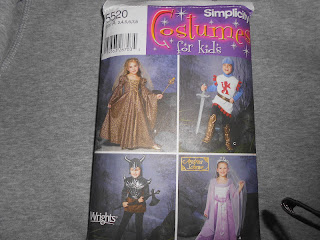 And Now....I know you have all been waiting to see at least one of my Knights in Shining Armor... 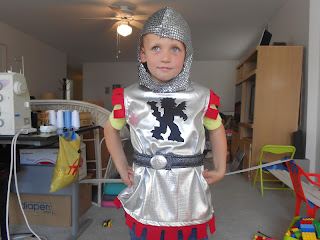 Jerry who is always so encouraging and supportive of my projects made two really cool shields and swords.  He used two pieces of cardboard for each sword and wrapped them in two different colors of duck tape.  He cut the shields also out of cardboard and used aluminum foil and ducktape to cover them. He put a handle on the backside of the shield. 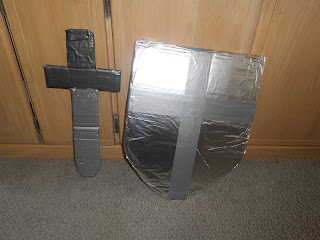 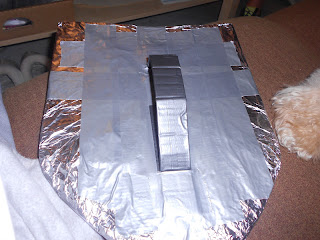 Here is a close up of the Lion the is the applique on the tunic.  I used black felt and Wonder Under and the felt actually adhere very securely to the shiny fabric.  I used a medium zig zag to sew around it. 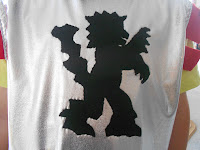 One Last Picture of Sir Henry! 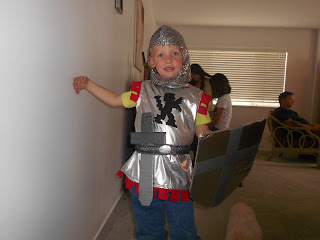 We are so excited for Sir Canaan to arrive....Cinderella Evie will feel very protected by these caring Knights in Shining Armor.

PS...When Henry saw the fabric and pattern and Evie's dress....He said, "Me and Canaan are going to look so cool and Evie...well she will look beautiful"..

Thank you for listening to My Knights In Shining Armor saga.
Posted by Jerry and Kay at 8:30 PM