A few weeks ago I was skyping with my daughter Jessica (SunnyStitching) and her children Evie and Canaan.  We were talking about when they come to stay with us in June for a month.  Evie "loves" to play dress up, and loves dressing up in her princess gowns.  During the conversation she said that she would need to bring her princess dresses to California.  Knowing there would be limited room in the luggage, Jessica told her not to worry because Nanny (me) loves to make dresses!.....

So began the Cinderella Dress.  It was such great timing as Simplicity patterns were $1.00 each at JoAnn's the week Jerry and I went to get the fabric.  I had not been to JoAnn's for many months as I have been recycling fabric, clothes, etc., for sewing clothes, etc.  We had such fun ...found just the right fabric and pattern.  I used Simplicity Pattern 2563. 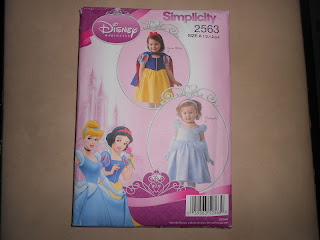 I was a little nervous using the fancy fabric, but the pattern was very easy to follow and the fabric was not so hard as I thought to sew.  I decided to add the bows.  I may have to adjust the hem when Evie arrives and wears it....at least I hope she will play in it.....but that will be easy.  I am so excited to see her in it!!!!! 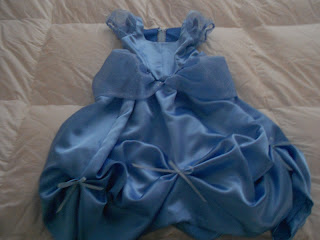 I included the headband in the photo below. 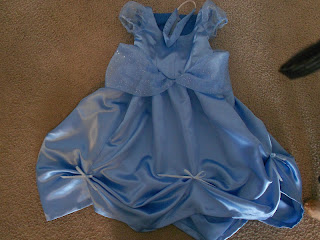 Closeup of the sleeve below.  I love the sheer fabric. 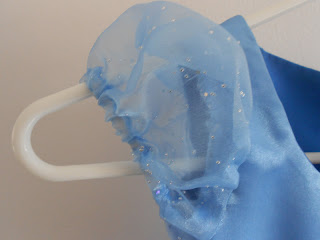 The ruffled flouce in the sheer sparkly fabric. 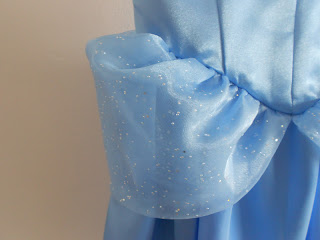 A lovely Cinderella dress for a lovely Evie..
Posted by Jerry and Kay at 6:16 PM