How to Make Worm Compost Bin

About 3 years ago, Jerry and I decided we wanted to compost the vegetables, fruits, etc., rather than throw them in the garbage.  We did some research on the internet and it was quite confusing.  Then as we were shopping at our local Farmer's Market that is in our town on Sundays, we noticed a little table with a "worm" sign.  The worm lady, Ruth sold us a bin with dirt and worms in it and told us what to do.  She made it so simple.

At one time we had three of them but have gone back down to two.  It is easy to make one and I hope we show it to be easy in the steps below. 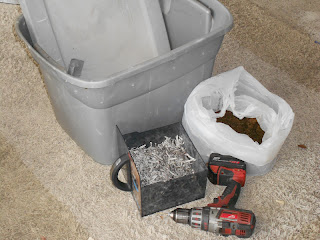 Supplies above:  Plastic bin (these can be purchased at stores like Target, etc for about $4.00).
Drill
Shredded Newspaper or Newspaper torn into 1 inch strips (Black and White Print is better than Color Print Paper)
Dirt with worms in it (plastic bag) 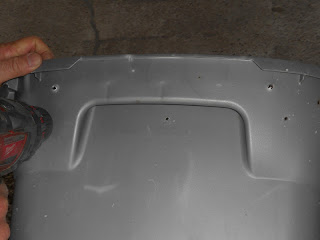 Drill holes in the bottom, on the sides (about one inch down from the top edge), and also around the plastic top that closes the bin.  The holes let air in and keep it from being smelly. 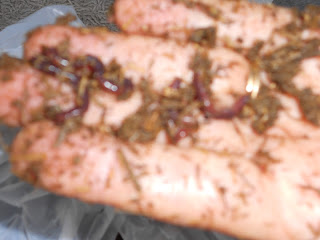 I am holding some of the worms for you to see. We think they are called Ruby Red Worms but a local plant nursery would know which ones work in compost.  I grew up fishing using worms as bait so holding them doesn't bother me:):) 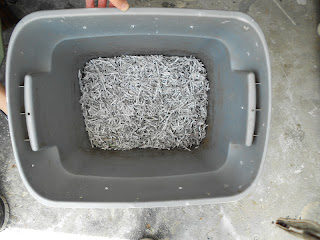 Next, put some shredded or torn newspaper on the bottom (just make sure holes were drilled in the bottom of the bin first) and wet it down. 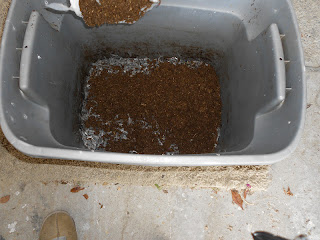 Now you can put in the dirt that the worms came in.  If you bought just worms add loose dirt from your garden. 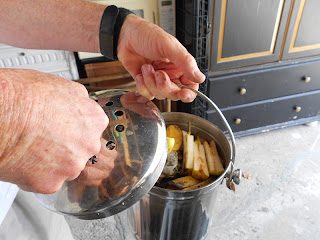 The fun is just starting!   Now, take your compost and put it on top of the dirt/worms. This is our fabulous compost bucket that we keep in the kitchen......I got it for free!!!!! from our neighbor as it was missing a screw.  I was so excited.  However, before we got this one, we used a plastic coffee container. For a dedicated worm bin, please do not add meat, dairy, fish, citrus, nuts/nutbutter or grains as compost.  Eggshells, coffee and used tea bags (as long as no lemon in the tea) are also great to add along with the vegetables and fruit. I am not sure about onions....I do not use them but there is probably info online about adding them. 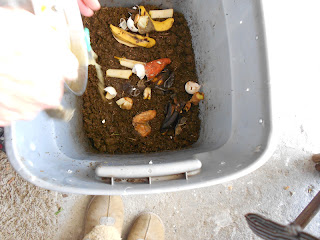 This picture above shows Jerry pouring the compost on top of the dirt/worms. 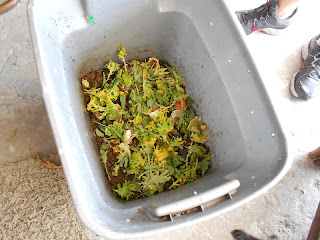 Above is view of a layer of the compost on top of the dirt and worms.  You can see the holes that were drilled in the sides and along the top edge. 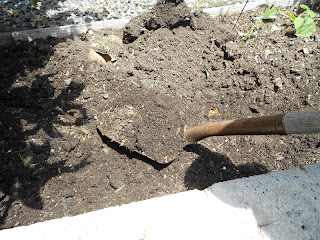 Jerry is shoveling dirt above from our little garden area to put on top of the compost...as shown below. 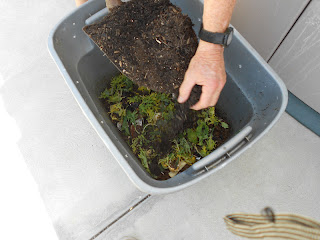 He is using his hand to take it off the shovel and spread it around. 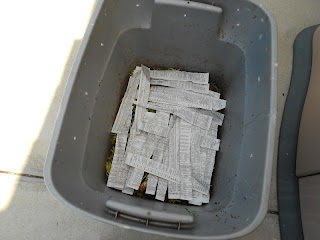 Next is the layer of newspaper.  Either shredded or torn into strips is ok to use.  Just need to cover completely. 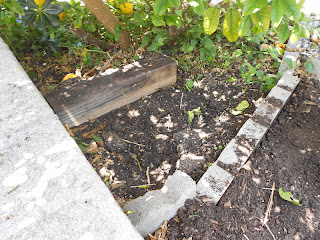 You can basically put the worm bin on top of a table or in a dirt area.  It is best if it is elevated so the liquid (sometimes called the worm tea) can be collected in a container; or on top of a dirt area and the tea will nourish that area it sits above.  Jerry elevated ours on top of the stone and the wood under our lemon tree. 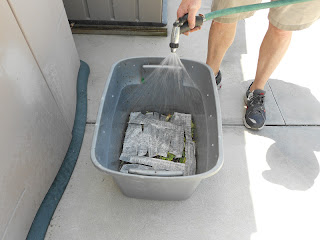 Now it is time to sprinkle water on the newspaper to dampen it.  It is importan to keep the layers moist as the worms could die if it is too dry.  Now put the top on the bin making sure holes were drilled in the top. 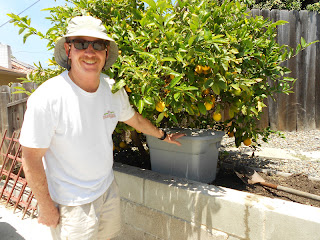 Worm Bin Finished and placed under the Lemon Tree by my great gardener!!!!!!
Continue adding your compost/dirt/newspaper/dampen with water  and soon the bin will be full of rich soil.
**It is important to not make the layers too thick.  If you have a lot of compost, just make more bins.    **This allows the worms to have time to eat the layers steadily.
**The Worm Bin should be in a shaded/sun area.  It needs to stay moist.

Composting, along with recycling paper, glass, metal has really reduced the garbage for our household


Feed the worms and they will return to you  dark beautiful soil for your garden.
Posted by Jerry and Kay at 9:59 PM