Sally and Brave Lion belong to my precious grandchildren Evie and Canaan who live in England with their mom and dad.  Their mom just happens to be one of my two daughters and the owner of a very beautiful blog Sunnystitching.


This is Part 2 of the story, Beds for Sally and Brave Lion.
To see Part 1 click here

Evie and Canaan's wonderful grandmother named Nanny had finished the beds for Sally and Brave Lion.  She wondered about also making blankets and pillows for each of these special animals.  Finally, she made a decision...YES!!.....she would also make blankets and pillows.

Nanny looked in her baskets with fabric that was leftover from other sewing projects.  Delighted, she found some pink and blue fleece that would work just perfect for what she had in mind. 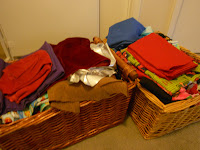 Nanny started by embroidering pictures on the little pillows.  She decided to use colors of embroidery thread that would go with the 3 colors in the beds.  Pink, Purple and White for Sally. Blue, Yellow and Green for Brave Lion. 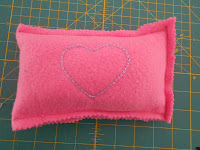 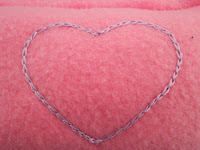 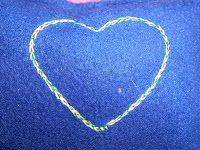 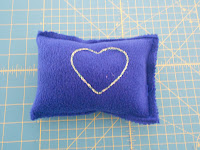 Nanny could not decide what to embroider on the blankets.  She thought and thought, and then had an idea for a design for each blanket. 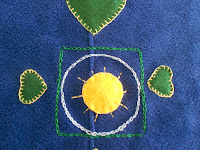 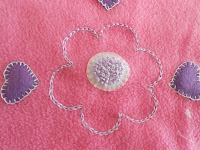 As Nanny embroidered the pillow and blankets. she thought lovingly of Evie, Canaan, Sally and Brave Lion.
The design on the blue one in the middle reminded her of the grass (green square) sky (blue circle) and of course the bright yellow sun.  The french knots in the middle of the flower on the pink one reminded her of flowers blooming!

The embroidery was finished!  However the blankets now needed something around their edges.  So, Nanny looked in her chest where bits of binding are stored and found the perfect binding...a leftover piece of binding that Jessica had made to sew on a quilt for Evie.

Nanny sewed on the bindings and the blankets were finished!......They looked just right! 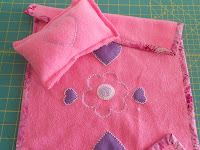 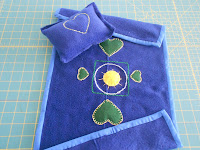 Nanny lovingly placed them inside the crocheted baskets. 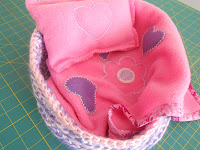 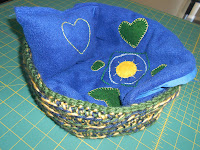 Later she wrapped them in tissue paper and Jessica (who was visiting Nanny) took them with her on the airplane to give to Evie, Canaan, Sally and Brave Lion.

Nanny can hardly wait to see Sally and Brave Lion in their new beds, snuggled on their new blankets on pillows in the third and final part of this endearing story.