In a recent post titled Fish Pocket Cargo Pants, I shared a pair of pants that I had made for Canaan, my grandson who lives in England.  I ended  that post with:

Canaan, Papa wants to take you fishing when you come in December.
Maybe you can wear your "Fish Pocket Cargo Pants"
Canaan and his sister Evie belong to my daughter Jessica of Sunnystitching and her husband who are teachers in England.   While skyping them shortly after sharing that post, Evie told me that she needed a fish dress to wear so she could also go fishing with Papa.  How cute is that!!!! Of course, all the grandkids can go but I could understand that she took my ending literally:):)

New project for Nanny....make fish fabric dress for Evie...Papa stopped at JoAnn's Fabric store on the way home the next week and got enough for the dress (just the right amount left on the bolt!).  I had previously purchased a pattern that I had been wanting to make.  McCall's M6388.  I did make the top ruffle long enough to go all the way around, instead of only halfway like on the pattern. 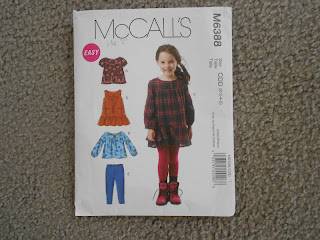 It was such a joy to sew the dress as well as the pants and shirt.  Even Brandy, our cute poodle wanted in the picture of it! 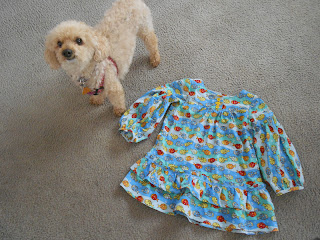 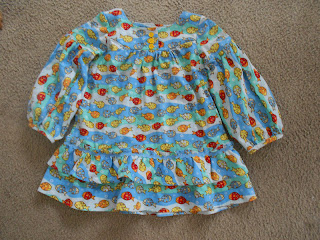 It looks like Evie will be the cutest fisher girl on the pier when they go fishing!
Posted by Jerry and Kay at 4:55 PM