Christmas Has Come and Gone

Hi everyone.  I have been so very busy the past few months sewing gifts for my grandchildren and also decorating for Christmas.  I made some really cute nightshirts for my neices who are 9 and 7years old; and also one for my granddaughter who is 9years old.  I sewed a really cute nightgown for my granddaughter who is 3 and hope to post pictures soon and the patterns I used.  I forgot to just take picture of them before gifting them.

For the grandsons 4 years and 2 years old I made the following fleece vests in a beautiful gray fleece I purchased at Joann's fabrics.  I used McCalls M6222 pattern...very easy to follow.  Will attempt to now put a picture of the boys modeling them.  I was nervous to sew in the separating zippers as I had never done this before but they were actually pretty easy!  Yea! 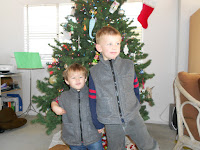 We have an annual ornament party and besides the candles my daughter and I painted with alcohol inks in a craft class at Michaels Craft Store this summer using alcohol inks, I crocheted a cowl as a raffle prize.  Added a border and some buttons to it and it came out really cute.  Used the following pattern but in a Caron Simply Soft yarn.   Pattern found on this link Cowl Crochet Pattern.  Used some of the yarn to make a Christmas collar for my daughter and son-in-law's French Bulldog.

Now, am starting a mobile out of felt owls for a friend and will also make a fleece blanket..pictures of finished products to follow......with other personal commitments for projects for the new year.

I continue to be thankful for my family, friends and for the time to be creative.
Happy New Year to you all.
Posted by Jerry and Kay at 11:13 PM